UK youth looking to build a future visit Toronto and get a course in skyscraper window cleaning under the guidance of Solar President Neal Dance.

Of windows and wildlife

On the morning of Friday June 10, 2011, I had an unexpected opportunity to work with a family of peregrine falcons who made their home on the ledge of 2200 Yonge Streets 15th floor.

Only a few weeks prior to that, I was involved with the rigging of a swing stage for a window replacement at the same building. While doing so, a very angry and vocal falcon circled not far overhead. At that time, it was explained to me that the angry falcon was raising her chicks close to where I was working and she saw me as at threat to her young. I have always tried to appreciate wild life from a distance, but she was swooping down close to me. I must admit, I was not comfortable and must have been quite amusing to anyone watching the fuss I was making. Little did I know that, in a few weeks, I would be face to face with the very same mother falcon and her chicks.

On the morning of June 10, Phil Aiken, field supervisor, and I met with several people from the Peregrine Foundation. They wanted us to quickly and safely take three falcon chicks out of their nest on the ledge, examine and band them on the roof and safely return them to their nest.

We all agreed that a ladder would be lowered from the roof to the ledge. Someone would climb down, gather up the chicks and carefully place them in a canvas case so they could be pulled up to the roof. Naturally, I would be the guy going down the ladder. 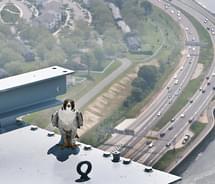 I was excited and nervous at the same time. Years ago, I had a pigeon fly up the leg of my pants while raising a davit arm. I really have not been very fond of birds ever since. However, the ladder was put in place and secured, so down I went. That is: down I went only after Phil promised to keep an eye on the mother falcon, who was rather irate by this time.

The male falcon was calm and less aggressive by comparison, but still on the scene. When I reached the bottom of the ladder, the angry mother, who put herself between her young and me, greeted me. She refused to move no matter how much I tried to reason with her. She was making me look bad to the spectators watching through the window. Finally with some patience and very gentle persuasion she flew off. Now it was time to gather the chicks and place them in the case. The chicks at that time could not fly, but they got around quick enough with their small legs. Finally I cornered them and two went right into the case. The third got my glove in its beak and tried to eat it right off my hand.

Away they went in the case up to the roof. I waited on the ledge with the angry mother screaming at me, while the others above examined and banded the baby falcons. Soon enough the chicks were sent back down in the case. I restored them to there nesting area. A minute or two later I was up the ladder, much to the delight and relief of at least one family of falcons.

UK youth looking to build a future visit Toronto and get a course in skyscraper window cleaning under the guidance of Solar President Neal Dance.

Manage your Solar account and keep track of current jobs.

Looking for an exciting career where you can move up in the world? Join our safe and professional window cleaning team!

We clean those too.
Learn more about why clean solar panels are more effective.